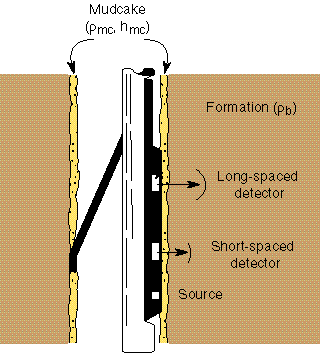 If you believe that for most of you this will be a very easy question to answer, think it twice, most people will answer something like this:

That is easy!!! Density, neutron & sonic, some others that are a little more technical will include Nuclear Magnetic Resonance as well.

Let me inform you that they have it all wrong and I will explain the reasons right now.

Gamma rays will lose energy during these interactions and the number of gamma rays returning to the detector will depend on the number of electrons present, the electron density, RHOe.

The electron density can be related to the bulk density (RHOB) of the minerals by a simple equation:

The assumption made in the interpretation is that:

This is very close for most elements commonly encountered, except hydrogen which has little effect on the measurement (as it only has 1 electron). Therefore we can assume that RHOe =  RHOB.

This is not 100% correct, equations have been developed that relates electron density to formation density and those are the ones applied on the different density tools in the market. Therefore, density tool as it names indicates measures density, in order to calculate porosity, you need to know the  lithology and then you can calculate it using the formula:

Where RHOma is the equivalent matrix density, RHOf is the fluid density (mud filtrate) and RHOB  is formation density determined by the tool readings.

To talk about the mechanism used by neutron tools to determine porosity, we need to define a parameter know as Hydrogen Index.

Neutron tools use a chemical or electrical neutron source and 2 to 3 detectors, the neutrons emitted by the source will interact with formation atoms, they will be slowed down from their initial “fast” state by collisions with the formation nuclei. At each collision there is some energy lost by the neutron.

The principal element involved in the slowing down is Hydrogen, because it is close in size to the neutron, this is why the tool measures the Hydrogen Index.

Neutron detector counts are then converted to porosity using a transform which is a mixture of theoretical and experimental work, these transform will give different porosity values according to the lithology.

Therefore, neutron tools measure Hydrogen Index and convert its measured counts to porosity depending on the formation matrix, so they do NOT measure porosity.

Sonic tools use a minimum of two acoustic transmitters and four receivers. The tools create an acoustic signal and measure how long it takes to pass through a rock. By simply measuring this time we get an indication of the formation properties.

The main property measured by the tool is the slowness, that is defined as the time needed for the acoustic signal to travel 1 foot in the formation.

Formation porosity can be determined with sonic tools using the following formula:

Where Dma is the equivalent matrix slowness, Df is the fluid slowness and DT is slowness determined by the tool readings.

An NMR tool can directly measure the density of hydrogen nuclei in reservoir fluids. Because the density of hydrogen nuclei present in water is known, data from an NMR tool can be directly converted to an apparent water-filled porosity. This conversion can be done without knowledge of the matrix, so it provides a lithology independent total porosity.

Tool physics is pretty complicated and outside the reach of this article, you can learn more about NMR on any of my courses.

What is really important to know here is that NMR measurement depends on Hydrogen Nuclei, so it is somehow dependent of the Hydrogen Index, thus we can say that it does not measures porosity but it allows to calculate it as with the other 3 types of tools we talked about before.

So as you should be able to realize now, there is not a single wireline tool that can “measure” porosity although there are several tools that allow us to determine it.

If you want to learn more about petrophysics and the fascinating relationships between formation lithologies and their fluid contents in the reservoir, take a look at some of my courses offered by Applied Stratigraphix: